That we even decided to return to Spring Training in 2009 after the debacle that was our 2008 trip is a testament to my irrational devotion to this team. It's not just that the A's lost every game we went to last year, but I pretty much lost my mind along the way as well. On one particular evening, this disastrous confluence reached a-head when, after about 13 more "adult beverages" than was wise for me to consume, I was approached by a classy-enough looking guy while I was at a bar next door to my hotel. The guy explained to me that he "just needed a place to crash for a few hours" while he waited for his friends to arrive in town on a plane that had been delayed all night. He explained that he had lost his wallet and didn't have any resources at the moment to get a hotel room. In my present state, that type of "guy's guy" sob story checked-out to me and so I had the guy follow me back to my room - where my friend was already asleep - and I opened the door for him and said, "Hey, that's my friend Andy on the right bed and that's my bed on the left. You can sleep there for now, I'm going to go back to the bar since it's only like 10pm. Leave whenever you want to." He responded with a thank you and reiterated that he'd only be around for an hour or so.

So I left it at that, thought I had just done my good deed for the trip and returned to the bar to congratulate myself. When I returned to my room a few hours later, the guy was gone and Andy was still asleep, so I thought, "Oh...he must've left like he said he was going to," and then I passed out. I woke up the next morning to Andy shaking me and asking, "Where the hell is my brand new computer?" Instantly, the my enormously moronic actions of the previous night re-materialized in my head and I just said squeaked out, "Ohhh F***, the guy must have taken it." Andy replied, "The GUY took it? What guy?" I told him, "Uhhh, well, the complete stranger I let into the room while you were sleeping...you know, THAT guy." He was not amused and I got a well deserved verbal berating and physical beating because of all that. For some reason, the smooth operating bandit only nabbed the computer and nothing else, but it was little consolation for what was one of the most disastrous nights of my life. We filed a police report and all but the computer was as good as gone and we left the desert with a fairly sour taste in our mouths...not to mention a strained relationship and me in debt a sizable sum to my best friend.

Luckily, this year's decision to power through the follies of recent history and return to the area rewarded us with a slightly more enjoyable experience, punctuated by cameos from Billy Beane, Lew Wolff and Ray Fosse and a whole bunch of offense courtesy the rebuilt Oakland lineup and powerhouse minor league system. 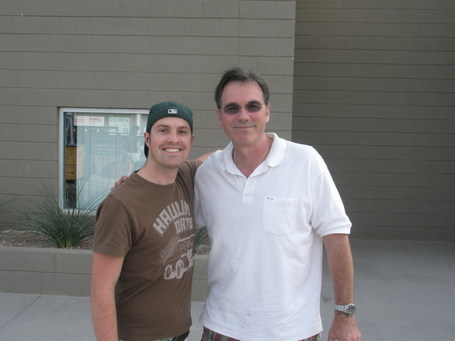 (Taj Adib with Billy Beane after Friday's win over the Mariners at Phoenix Muni. I asked him when we'd likely see Cabrera and/or Nomar on the field. He said that O-Cab had been sporting a "Sizable spare tire" around his torso and that he (Beane) wouldn't let him onto the field until he got his ass in shape - this was a week ago, Friday BTW.)

The A's won all three games we attended - Wednesday at home against the White Sox, Thursday against the Giants in Scottsdale and Friday at-home against the Mariners. Since each player plays only a few innings a game, take these scouting reports with a grain of salt, but they're just a few observations I made during the course of these brief performances.

Dana Eveland started the game for the A's and while his stat line looked relatively neat (no runs or hits allowed, 2 walks, 1 K) he looked like the early season 2008 Eveland: effectively wild. It was only 2 innings, but he wasn't all that impressive.

Russ Springer took over for Eveland and he reminded me of why the cut-fastball is my new favorite pitch to watch. Sitting right behind home-plate, it's easy to see why the pitch is so effective: it looks straight as an arrow right up until the point it just about crosses home plate, and then it darts one way or the other and just frustrates the hell of hitters. That Springer throws it with a deceptively slow arm-angle just intensifies the effect. We're going to like this guy a lot this season and opposing hitters are going to hate him.

James Simmons was the guy who probably impressed me the most this game. Springer was good and effective, but you expect that from a guy who's been in the majors since like 1973 and has put up sub-3.00 ERAs the past two seasons. Simmons' stuff was good (fairly hard fastball with some good bit, solid changeup and sharp breaking curve) and he just pounded the zone. In his 2 innings, I don't think he even threw a single ball (okay, yeah he threw a few), but he was ahead of all the hitters he faced and ended up with 3 K's and 0 walks. He allowed two hits, but the Sox hitters looked pretty overmatched against him. Since he's around the plate so much, there's no doubt that Simmons is going to allow plenty of hits, but he's just not going to give-in to any hitters either and he is going to be a good major league pitcher that keeps the A's in a lot of games because of it.

We decided to take the short drive to Scottsdale to see the Giants and A's in the SF team's digs, and we were rewarded with a very pleasing environment. Just like it is in real life in the Bay, the Giants stadium blows the A's one out of water - but at least the A's won this game.

Trevor Cahill started for the A's, and after the Giants got the best of him via a very NL-style opening run in the 1st (push bunt past the mound to the 2nd baseman, couple of ground outs, wild pitch) Trevor settled down and got about 4 straight ground outs and then struck out the side in the 3rd. The power sinker was on full display and while his off-speed stuff was a little inconsistent, he still kept it down and away from the wheel houses of the hitters while keeping them honest. He obviously has some major talent.

Ellis turned on a meaty pitch in the 1st, came through with a solid swing and collected a nice RBI single to left to even the scoring early in the game while Joe Dillon looked pretty solid both in the field at 3rd and with the bat as he collected a hit and two walks.

Six right-handed relievers kept the Giants largely off the-board for the rest of the game after Cahill's 3 innings, and honestly, they all looked about the same both in appearance and in results, which is to say that they were effective and whatnot but didn't really dominate either.

(The A's split squad team that played at home on Thursday beat the South African WBC team 6-1 while we were in Scottsdale).

It was obvious after the first four batters of this game that AL West-lifer Jarrod Washburn didn't bring his best stuff to the park today. Rajai Davis, Kurt Suzuki, Matt Holliday and Jason Giambi all reached base safely to begin the game. The A's cruised to victory today, beating the crap out of the ball to all fields.

Rajai Davis actually ended up 4-for-4 with two doubles. With the way he's swinging the bat this Spring, Raj should make the case fairly easily that he belongs on the Opening Day roster and that he should at least be given the opportunity to enter into a semi-regular platoon with Sweeney in center.

Jason Giambi actually got  hit by a pitch 3 straight times today which was pretty interesting. He did glare at the pitcher the 3rd time it happened but he didn't seem too worked up about it.

On the mound, Edgar Gonzalez (looking solid in his quest for a rotation spot) started and held the Mariners scoreless over 3 innings with only two hits allowed. He struck out 2 batters. Outman relieved Gonzalez and got hit around a bit (5 hits allowed) but those hits only materialized into the Mariners lone run and Josh did strikeout 3 guys. Speaking of Josh, I'm just not convinced that starting or pitching in long stints is going to be best for him long-term. His off-speed pitches are not that great at all and while he can bring his fastball up into the mid-90s fairly consistently, it seems like a pretty hittable pitch. I think he ends up as an Embree-like "here's 96 heater, after 96 hitter, see if you can it."

Vin Mazzaro (who I met after the game and informed me that he does indeed prefer to be called Vin) also threw a couple of innings late in the game for the A's and looked pretty overpowering actually, 3 K's in 2 innings.

Sean Doolittle really impressed the hell out of me at the plate today. He had two looooong doubles after taking over for Giambi at 1st and collected 3 RBIs. His hits made that hard contact, "thwack" and resounded through the stadium. 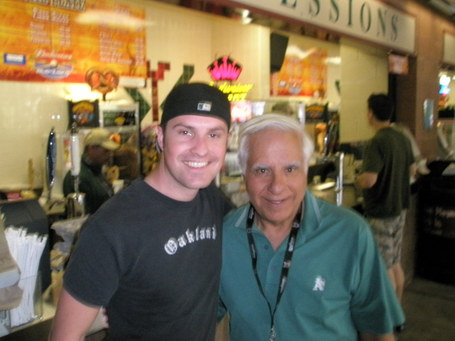 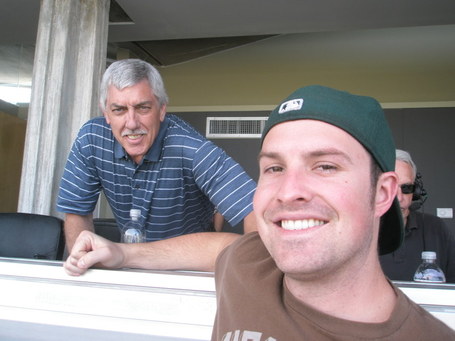 (Taj with A's broadcaster Ray Fosse. He was just sitting down to do the game and invited us over to take a pic. Nice guy....) 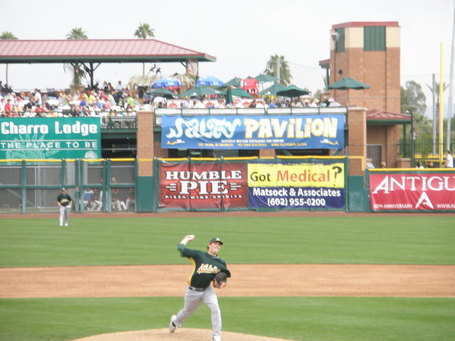 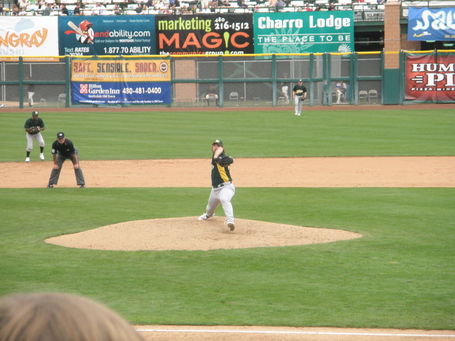 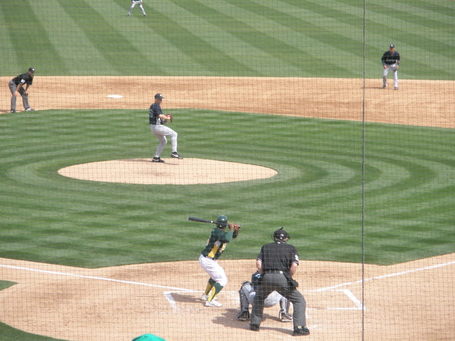 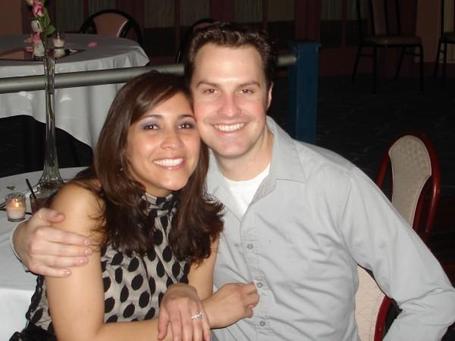 (And finally...me and the future Mrs. Adib right after I proposed to her and she said yes!)

Note: the proposal happened in Catalina Island a few weeks ago, but I am obligated to mention it here after the missus gave her blessing to my "boys only" trip to Spring Training.