Coming off yesterday's loss to the Cleveland Indians, the A's return to Phoenix Muni today for a 1:05 PM contest with a team we are very familiar with: the San Francisco Giants, though they'll be a split-squad group. For the fortunate ones who have it - I am not among them - the game is being shown on CSNCA, broadcast on 860 AM.

Although All-Star Justin Duchscherer had a pain-free day of long toss yesterday, speculation says he won't be ready in time for Opening Day. (source) If that's the case, who in your opinion gets the nod? It could be a toss-up at this point but my guess is Sean Gallagher. Also, Orlando Cabrera is expected to make his A's debut as the DH. Bobby Crosby saw some time at 1B against the Indians after playing 3B lately. Word has it his next position could be as one of this guy's colleagues: 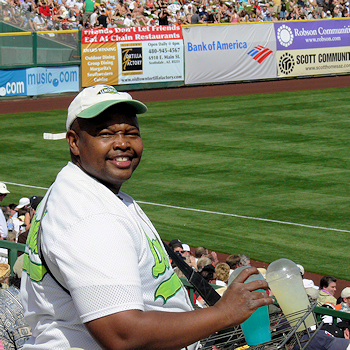 (Taken in Scottsdale back in 2006, but he might work games in Phoenix too. If you ever hear "Lemonade, just like my grandma made! You know you want some! Yeah baby!" you'll know it's him)

Dallas Braden is expected to face Joe Martinez. The A's are 8-7-1 while the Giants stand at 8-8.

I may do a Gameday thread for the USA/Puerto Rico game that begins at 5 PM locally.

Shameless self-promotion moment: on Monday I should find out if an offer I submitted for a home in Elk Grove is accepted or not. There are six offers in on it but I think mine is very competitive. It would be the first home I could call my own, so any and all well-wishes are gladly welcomed.