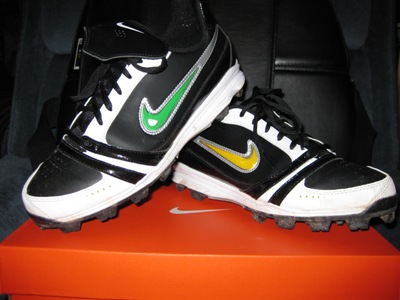 My new softball cleats would like everyone to know how dedicated I am to the team this year; they're not white, but they are green and gold. That's my contribution; I think it will really make a difference.

Anyway, there's a game today (who gets tired of hearing that?!)! The A's open in front of their home fans for the first time this Spring Training, as they face off against the Brewers (again).

We get our first look at Dana Eveland, as he takes the mound for the A's against Manny Parra, a ten-game winner for the Brewers in his first full season last year.

The A's are looking to score some runs, and not to knock the longball, but it would be nice to see some runs put on the board in a variety of ways today.