Interested in the Warriors? Golden State of Mind is holding one of their huge events on Friday January 8th. There's a rumor of a great special guest. Thought I'd pass it along... 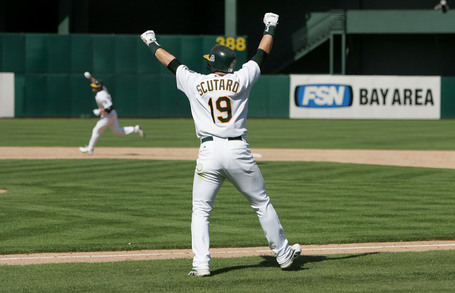 Decade posts are all the rage lately, so we're going to do our own. You may have seen this post from Big League Stew on Yahoo, naming their MLB All-Decade team. It is pretty much what one would expect; Posada (C), Pujols (1B), Kent (2B), Jeter (SS), A-Rod (3B), Bonds (LF), Ichiro (CF), Vlad (RF), Manny (DH), Pedro Martinez and Randy Johnson (SP), Rivera (Closer). I can't really argue those names, but I thought we could make up an all-decade A's team, and share favorite moments of 2000-2009.

To refresh your memory:

Ramon Hernandez - He was the catcher during the A's golden years of 2000-2004; he caught Mulder, Hudson, and Zito, and was a big part of getting the A's to the playoffs.

Jason Giambi - Need I say more? Not only was Giambi one of the best players in the league during his heyday, but he has had less than zero competition the in years since he left.

Mark Ellis  - Ellis started in 2002 for the A's, and played the rest of the decade, with the exception of 2004. A tremendous defensive player, with some good offensive years, Ellis is the only player to really choose in this category.

Miguel Tejada - Tejada, like Hernandez, played for the teams of 2000 to 2004, and his position on the A's has never been successfully replaced. This is a no-brainer call as well.

Eric Chavez - Like Ellis, Chavez has been the name filling the position for the entire decade, but over the last few years, it has literally been in name only. Still, when he was good, he was good, and a big part of the A's early 2000 playoff runs.

This was where my little experiment got really fun. Can you think of outfield stars on the Oakland A's from 2000-2009? Are we left with Terrence Long? Did Jermaine Dye play long enough--and was healthy enough--to count? What about Mark Kotsay? This was a struggle.

I've narrowed it down to: Mark Kotsay and Nick Swisher for sure. The third spot could go to either Jack Cust or Jermaine Dye, with an honorable mention to Eric Byrnes. What do you think?

Frank Thomas - Yes, Thomas played one year of the 2000's with the A's. It was an awesome year. He wins my vote.

RHP: Tim Hudson - Hudson takes this for his years with the A's early in the decade. Honorable mention to Dan Haren.

LHP: Barry Zito - His Cy award and his victory against Johan Santana in 2006 seal this spot for me. Honorable mention to Mark Mulder.

Closer: Huston Street. I'll save Andrew Bailey for the next decade.

Can I abstain from a vote? Of course I think Ken Macha made his share of mistakes, but Art Howe certainly made some questionable decisions (with much better teams) as well. To paraphrase a player on the Twins in 2002; "We (the Twins) couldn't beat lefties this year, why did Hudson start twice, when Mulder and Zito were in the series as well?" Match that series fail against Ken Macha's use of Mecir/Rincon in the infamous Zito game to lose the AL West to the Angels and Macha hitting Melhuse/Long against the Red Sox with the tying run on third and less than two outs, and it's a tough call. I pick...Stomper?

Worst Moment of the Decade:

I know there will be probably be votes for the Jeter flip, but on some level, I figure that was a one-in-a-million baseball play; it didn't make or break the series itself, and the run in question would have only tied the game. Far worse to me was watching Jermaine Dye break his leg, or Mecir and Rincon being chosen to relieve Zito, with Hudson waiting in the wings for a one-game winner-takes-all start. But the very worst back-to-back at-bats were turned in by Long and Melhuse against Derek Lowe and I pick those combined at-bats as the worst moment of the decade. I was there in person for all of the above events, and that one definitely hurt the most.

Best Moment of the Decade:

This was a really, really tough call. Apparently, I attended a lot of A's playoff games in this decade, since I was also there in person for both of these picks too. My runner-up award goes to the Ramon Hernandez two-out, bases-loaded bunt against the Red Sox in extra innings. Not only was it a complete surprise to everyone on the Red Sox and the fans in the park, but it won the first game of the series for the A's, and may have given them the momentum to take the subsequent day game, as well.

However, considering that the A's could not close out the series, it takes a little luster out of the moment looking back. Which is why my number one moment is this, which needs no introduction:

Strange, since this wasn't even a game-winning hit, but somehow it captured the moment when all of the A's fans in the park realized that this wasn't going to be another ALDS ending in heartbreak; that the A's were going to the ALCS for the first time in a decade and a half. Coupled with the goosebump-inducing cheer of "Marco" "Scutaro" from the entire stadium, this moment elicites warm and fuzzy feelings that can still be regenerated in the current tough times.

We continue the winter meetings all this week, but I thought we could share some A's moments of the decade as well. Best? Worst? What/who am I missing? What would you change?