So far, the frog in my pocket and I have looked at potential relocation markets, Bay Area dynamics specifically, San Jose process progress, potential sites in Oaktown, attendance history in Oaktown,  and stadium culture suggestions.

Today we want to talk about the biggest downside to the potential San Jose stadium: Transportation.

First, let's qualify this thesis a bit. Diridon is very well situated from a transportation perspective. There is a freeway within a 1/4 mile of the site. There is a Caltrain, VTA Light Rail and Amtrak station adjacent to the proposed site. Some would point to the eventual HSR terminal as well as BART to Silicon Valley extension as transportation strengths. We won't, however.

We won't for two reasons. First, these two initiatives are still in flux a bit. They are "working themselves out" so to speak. Second, even if they are completed in the original time frames, a stadium would be in Downtown San Jose for at least 5 years before BART or HSR. So what is an East Bay fan to do?

So let's assume it is one year from now. San Jose voters have given their approval to the City's plan for the stadium (details of which we can only infer at this point). MLB has decided that it is in the leagues best interest to keep the A's in the Bay Area and for this market to operate like LA, Chicago and NY and the entire 7 county territory is shared. In Short, Lew Wollf and the Fisher's are moving forward with San Jose. The frog in my pocket says that in this scenario the A's will be playing in downtown San Jose in April, 2014.

This means that the transportation landscape will be pretty much exactly as it is today, minus one new BART station closer to the South Bay but still nowhere near Diridon from a pedestrian perspective. Milpitas is anticipated to follow sometime after, like around 2018. Actually, the linked FAQ seems to imply the entire line being completed by 2018, which at this point means through the Berryessa Station. That puts Milpitas Station's opening around 2016. 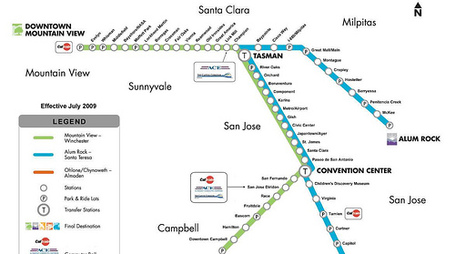 The VTA Light Rail, at least the stations germane to our discussion (via obiwan2900)

So this means that the transportation situation in San Jose will be an evolving one. We, the frog in my pocket and I, are going to look at it in three phases. We will call them "Day One through 2016," "2016 through 2020," and "Utopia." So, without further adieu.

The first thing we will all have to do, us East Bay fans is admit we ain't getting there via single mode of transportation unless we drive all the way. That's no fun, to just post driving times we mean. So, we are going to assume that we have to take VTA Light Rail at some point in our journey.

It just occurred to us that "East Bay" is kind of a vast area. We are picking two cities in particular, Pleasanton (cause we live there) and Berkeley (cause Nico lives there) as starting points for our maptastic adventures.

One other stipulation. We are not going to count on shuttles from Fremont BART or any other such imaginary nonsense. Until, of course, it is no longer imaginary.

Berkeley first. My  first thought is that traveling to San Jose from this city might be a virtual portal to a bygone era best depicted in one of my favorite movies ever. Or that dumb Babe Ruth pic staring John Goodman. 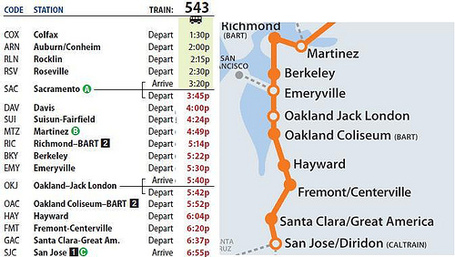 Admittedly, there are problems with this plan. Like for instance, the latest return train on the Capitol Corridor is way before the game is over. It departs at 7:35 per the schedule found here (WARNING: it's a PDF). And, that only adds to the fact that you'd have to be on a train for 3 hours all told.

Second, Pleasanton. For this trip let's drive to a VTA station and train on in to the stadium? Shall we?

This is probably the best bet:

The "A" in the picture above is a Light Rail station near the crossing on 880 and 237. How long would it take to get there from Pleasanton? 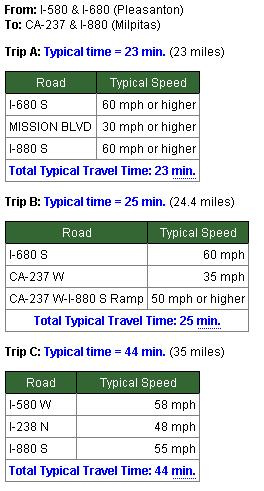 A Table showing driving times on Tuesdays trough Thursdays according 511.org (via obiwan2900)

Not so bad. 23 minutes on the quickest route. But according to the VTA trip planner, we'd actually have to leave at about 5:30 for this to get us to the ballpark in time for a weeknight game. Because it would take 52 minutes.Driving all the way is a much better option (thinking about time only, not carbon footprints) from the 680 corridor. 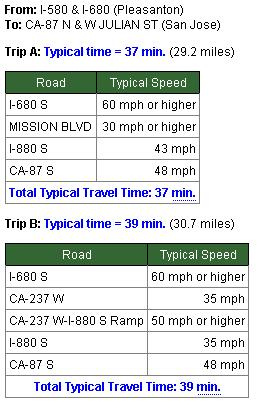 So, from two East Bay spots in Phase 1, the transportation options suck raw eggs. Driving from Eastern Alameda County and Southern Contra Costa County isn't horrible, but no BART makes just about all mass transit options implausible. Driving from Berkeley sucks. 511.org puts weekday driving at about an hour and half from the land of the tree sitters. Basically, about as long as the train trip.

East Bay fans, 2016 is waaaaaayyyyy easier than the first 2 years of San JosA's. Why you ask? Cause all you have to do is jump on BART and head to Milpitas Station where you can grab a light rail train. Where is Milpitas Statsion you ask? A picture:

Montague VTA Light Rail ("A" marks the spot), the future connecting point of BART and Santa Clara County (via obiwan2900)

Joyus Day! Or not so fast, because actually taking BART and jumping on Light Rail will probably take longer than the train or the driving for our two East Bay spots. No official estimate could be found by me or the frog in my pocket. But Currently, from Pleasanton to Fremont takes about 30 minutes and then from Montague to downtown San Jose takes an hour... From Berkeley to Fremont takes 50 Minutes. We have to add in some time to go through Warm Springs and get to Milpitas. We have to add some to get from BART to Light Rail.

So even though we are making progress, it will take longer to get from our East Bay spots with the improvements in phase 2 than it took in phase 1. And it won't be anymore convenient than it was. So we make it through 6 years and the transportation situation will be pretty much as it is today. Moving right along...

Some time after 2020 (assuming we all lived past 2012 and all) a transportation utopia awaits. Trains moving faster than Superman will be streaming into the depot from all corners of the great state of California. BART will make convenience an option for us East Bay types. Here is the map: 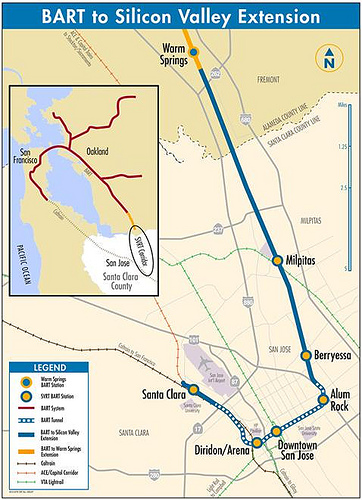 One mode of transport from anywhere! (via obiwan2900)

That'll be the day!

So in summary... people who think transportation is a problem for the East Bay fans are right. Hopefully something will be worked out (shuttles from BART, Capitol Corridor running later). Assuming San Jose is it.