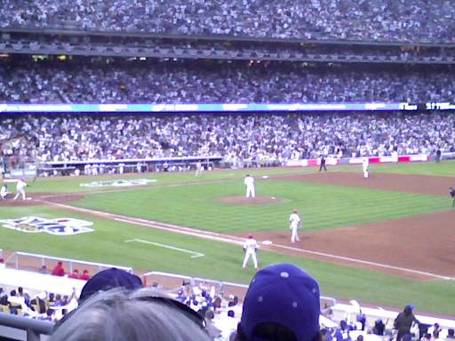 Second inning: Preemptively tiring of comments about "Los Angeles baseball fans" when really, the problem is "lack of a Los Angeles public transportation system". Cramming cars holding 56,800 fans into a parking lot with two-lane roads through residential neighborhoods all before a 5:00PM game is a rather impressive feat in itself.

Third inning: It appears that the Dodgers forgot to replace their batting practice pitcher with their starting pitcher tonight. (pause) What? That's Billingsley? My bad.

Fourth inning: It's a beautiful night for a ballgame. It's about 70 degrees with a full moon hanging over the stadium in all its glory. I'm going to miss baseball.

Fifth inning: I hope Furcal has police escorts lined up leaving the stadium tonight. It doesn't get much worse than three errors in an inning, as you lazily run after a ball you missed during the last game of your season.

Sixth inning: Manny's good. I wonder if he can pitch? Actually, I wonder if he likes the weather in Oakland, and if he'd be willing to take a pay cut.

Seventh inning: Not even Tommy Lasorda waving a Dodger rally towel can save this game for the Dodger fans.

Eighth inning: MY EYES!!! WHY MY EYES!!! IT'S BAD ENOUGH THAT THEY SHOW "THE" HOMERUN ALL OVER THE PLACE, BUT WHY DID THEY HAVE TO SHOW THE WHOLE AT-BAT!! HELP! PLEASE MAKE IT STOP! OH NO, GIBSON IS IN THE HOUSE, HE'S TAKING A BOW. WHY ME?! I'M SO GLAD THE PHILLIES ARE WINNING!!!

Ninth inning: I'm sure FOX is thrilled that the Phillies are going to the World Series (ha ha). You can believe they are hoping against hope that the Red Sox will pull out another amazing comeback. I say no. GO RAYS GO!!!!!!