Share All sharing options for: Playoffs Day One Wrap-up

Well, that was fun!

Aside from one sloppy inning that decided the game, this game was a great pitcher's duel pretty much the whole way through. Hamels got the win in his awesome eight innings, and Lidge the scary save, throwing a lot of pitches, as he saw the Brewers storm back to make a game out of it, scoring one run and leaving the tying runs on base.

Despite the early homerun and the 2-run lead that the Cubs staked him to, Dempster danced with fire for most of the early innings, finally setting the table for a Loney grand slam. Manny being Manny put the icing on the cake with a homerun of his own, leading the Dodgers to the early series win.

I won't lie; watching the Angels lose their tenth straight postseason game to the Red Sox was fun, especially if you are sick of hearing about "Angels' Brand Baseball", which apparently is running into outs in key situations. Jason Bay being Manny erased a 1-0 deficit with an absolute bomb to stake the Sox to a 2-1 lead, which would have been enough for the win. They added two more runs, just for fun.

And if you would like photo evidence, thank Paul Thomas: 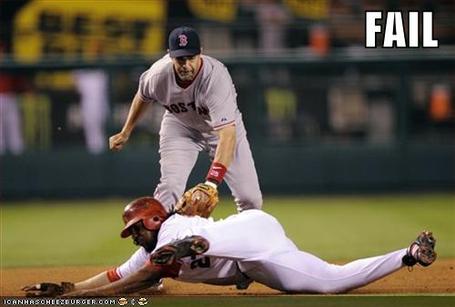 Three more games tomorrow for your viewing pleasure; including the Tampa Bay/White Sox game, which kicks off the day at 11:30AM.